Anyone who has worked on a kitchen hot line knows there is a specific style of language used. It is a combination of profanity, sarcasm, verbal abbreviations, and tradition. Some terms used on a hotline have been passed down through generations of chefs– others are native to only a specific restaurant’s backline. No matter the origins each phrase (like most things in a kitchen) has a specific purpose. Here are the top ten most often heard phrases in a kitchen.

Used whenever a ticket is rung in. Typically, the expo will yell ‘Order in!’ or if there is an add-on to a ticket he/she will shout, “Walking-in!” 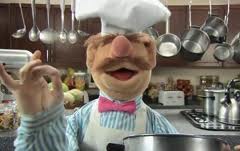 The occasional joke about needing an Echo! or a John Deere means a chef is in the ‘weeds,’ or better put – in over their heads. Orders are piling in and that particular chef can’t get them out quick enough. Unfortunately, for them they not only become ‘weeded,’ but also the blunt of the jokes for that evening.

Not a very exciting trio of words for any chef to hear because they normally are yelled during the middle of the rush when an item was missed/left off a ticket (or if a dish comes back). It is never fun when you’re cooking fifteen dishes and a chef yells, “I need a mid-well porterhouse, ON THE FLY!”

Any of these three refer to the microwave.

A simple way of acknowledging you heard your chef (of fellow linesmen). If an order is called in, you’d reply, “Heard, chef!” and move on.

No explanation needed here. Anyone who has been in a kitchen would be lying if they didn’t here, chef, at least three dozen times in a night.

A total count of how many items are needed. If a chef has six salmons, the expo would say, “You have six salmon, all day!”

The signal to go ahead and start preparing/plating up a dish. If “order fire” is heard then the ticket that just came in has no appetizers or courses waiting and the line should go ahead and begin making it.

It isn’t just the name of the site, but a very commonly used term to communicate when a kitchen is out of a product. The chef will tell the expo, “86 the mahi” or “86 the fish special.” This will be relayed to the servers, so they can explain to the customers that the fish special (mahi) is no longer available.

Easily the most often used expression in a kitchen. Any time someone is maneuvering on the hot line, through the kitchen, even at the bar they’ll yell, “Behind!” to let the person ahead of them know they are coming up behind them. If you’re walking up to a blind corner you’ll hear, “corner!” or if anyone is carrying anything hot (or of importance) you’ll surely hear, “Behind! Hot!”

Swimming/It is in the Pond – Any time something is dropped into the fryer.

Reggae – Used to determine the original style of a product. If a cheeseburger normally gets American cheese on the menu and you have one with American cheese and one with blue cheese then you’d say one, “one reggae burger, one blue.”

On Deck – The next ticket in line. If a ticket was just fired, then the immediate ticket after it is ‘on deck.’